Uber vs. Lyft: A Battle of the Marketing Minds

Ridesharing has shaken up the transportation industry, and it doesn’t show any signs of slowing down. In just four years, Uber and Lyft have surpassed any other form of ground transportation with 72.5% of the market share – outperforming rental cars at 22.3% and taxis at 5.2%.

While Uber pioneered the rideshare experience, Lyft has been the successor that continues to gain traction in the market. In fact, Lyft holds 35% of the national ride-sharing market, which represents growth of 75% in just one year. Both Uber and Lyft offer convenient, relatively inexpensive modes of transportation in major areas. Whether it’s commuting to and from work, meeting up with friends, or hitting the gym – consumers use their rideshare apps to get picked up for a ride within minutes.

Through unique branding and marketing initiatives, Uber and Lyft have been able to effectively distinguish their services from one another. But neither of their roads to success have been easy.

A Divide of the Rides

Uber established as an on-demand vehicle service in San Francisco and, in five years, transformed into the top ride-hailing app in 58 countries. Soon after Uber’s launch, Lyft was founded in San Francisco as another ridesharing service.

The launch of Lyft couldn’t have come at a more ideal time for growth. In 2017, Uber was put in the spotlight – but for all the wrong reasons. News stories were filled with Uber’s scandals, such as sexual harassment claims, the loss of executives, and a cyber-attack cover-up.

While Uber was busy repairing its image, Lyft was hard at work building its brand to appeal to a greater community. It provided a gateway for riders and drivers who wanted to disassociate from Uber and its unethical history. In this way, Lyft was able to reach more and more app users, simply by providing an alternative to ride-hailers.

Even though Uber’s scandals leveraged Lyft’s growth, Uber had already been well-established before all of the turmoil occurred. Uber is a brand name that managed to become the word for what it is – similar to Kleenex and Band-Aids. Uber is even used as a verb – with ride-hailers saying “I Uber-ed here” or “should we Uber?” By becoming the dominant term in our everyday language, Uber has continued to be the leader in consumers’ minds (and phones).

Uber and Lyft are each telling a very different story to differentiate their brand in the marketplace.

Lyft first entered the market as a casual, friendly carpool experience that aimed to appeal to younger generations. Their drivers even had a pink mustache affixed to the grill of their car. (This mustache has since been replaced with an “Amp” device, which lights up the car’s dashboard to help riders easily find their car.)

Lyft’s marketing campaigns have taken a similar relaxed, friendly approach. For example, their “riding is the new driving” campaign illustrates that Lyft is the easy solution to moving through congested roads, avoiding parking, and dodging costly car repairs. 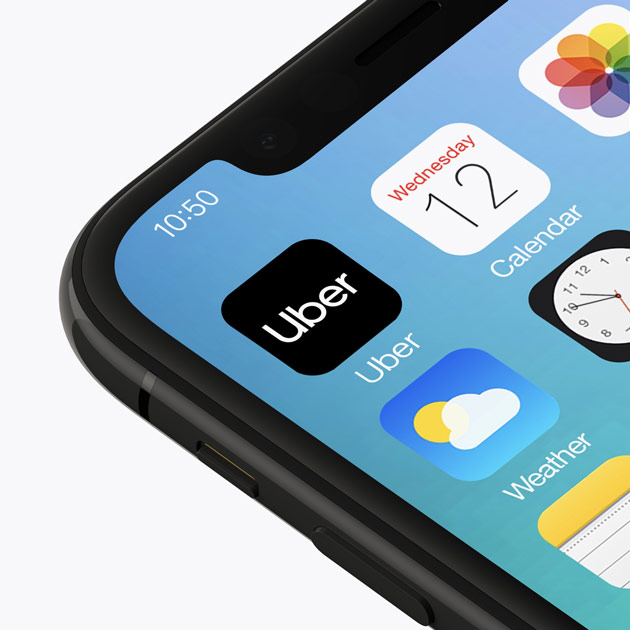 Uber, on the other hand, has been telling a different story. They began as a black car service with a business-like aesthetic for those passengers who seek a more luxurious ride. While Uber doesn’t have an “Amp” device, they distinguish their cars with an Uber-branded decal on the bottom of windshields.

Uber’s latest campaign, “Moving Forward,” aims to show that Uber is headed in a fresh direction under its new CEO. It teases out new products and services that will be available to both riders and drivers, along with business model changes. Uber is illustrating that they’re a force to be reckoned with in the industry – no matter what happened in the past.

A Battle of the Brands

Both Uber and Lyft went through major rebrands recently in an effort to further distinguish themselves in the rideshare industry.

Lyft’s refreshed brand has an entirely uplifted look, with new fonts and icons to match the growing brand. They also established a new color palette, with secondary colors that make it more visually appealing to viewers. The goal of the new branding was to keep it simple, with contrasting elements that play on its spirited aesthetic. With this new brand identity, Lyft has introduced a bolder style, which creates a new experience for users. 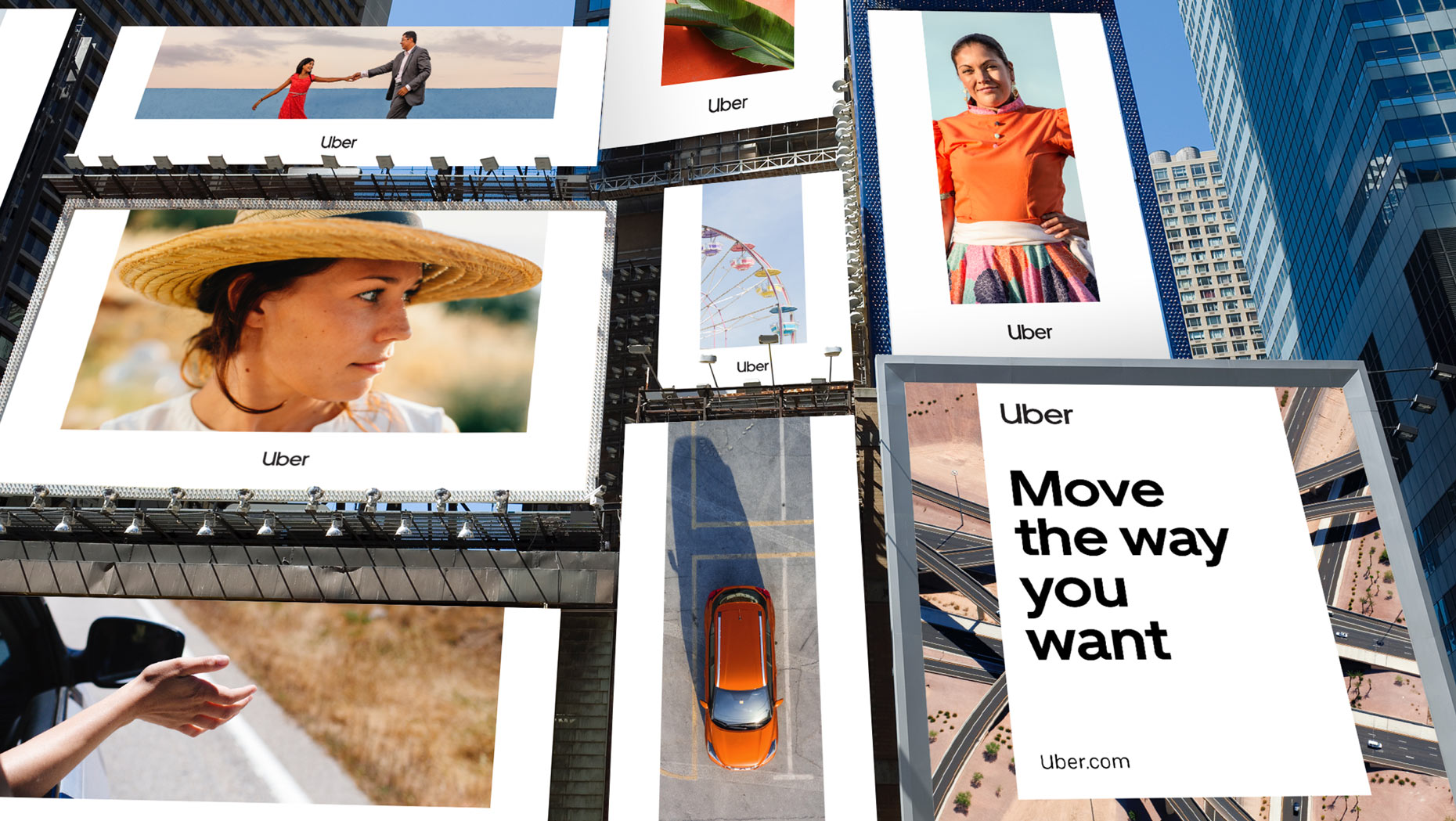 Not long after Lyft announced its new brand, Uber went through its own. In an effort to cleanse its past reputation, Uber revamped its entire look, with custom typeface, new colors, and a redesigned in-app interface with animations. This not only gives users a new experience, it shines light on the advancements Uber continues to make in the industry. Uber’s rebrand aimed to focus on three primary entities: its name, the “U,” and the color black. Through these key elements, Uber was able to transform its marketing campaigns and set the bar higher in the rideshare space.

The Future of Rideshare

Both Uber and Lyft are staple apps for any smartphone user. These services make for an easy commute during a hectic morning or a quick ride to weekend plans. No matter how they are used – Uber and Lyft have formed a rideshare network that caters to consumers everywhere.

These companies have already shown their drive to become the top brand in the industry. It will only be a matter of time before consumers start to see Uber and Lyft take over other means of transportation, whether it’s on the road, in the subway, or in the sky.

But that’s not all – Uber and Lyft have the motivation to take over other industries as well. Uber has already initiated services such as UberEats, UberBusiness, UberFreight and UberHealth. Lyft, on the other hand, has introduced carbon-neutral rides, bike-shares, and other modes of public transit.

Regardless of what industries they tackle next, one thing is for sure – the battle between Uber and Lyft is just getting started.

Are you more likely to use Uber or Lyft based off of their marketing strategies? Let us know on LinkedIn!

5 Ways To Prepare Your Business For The Metaverse

A New Meaning To Hybrid Workspace

Do You Have A Place In The Metaverse?

Join Forces With A Well-Oiled Machine