Traditionally, a 10-year anniversary calls for a present made of tin or aluminum. Here at Boston Digital, we believe that a decade of work and commitment calls for something even grander — a brand-new car, to be exact.

Jim Brockman, our Director of Interactive Services, recently celebrated his 10-year anniversary with the company. After working in Brooklyn for several years, Brockman joined Boston Digital (when it was still Boston Interactive) in 2009. He began as an Account Manager before working his way up to the director position that he currently holds. Brockman is an integral part of Boston Digital, bringing in wins for the company while serving as a mentor for his colleagues.

Our CEO, Chuck Murphy, couldn’t agree more. “Jim is one of our rockstar team members. He has seen the ups and downs in the business, but has never wavered,” says Murphy.

Through the years, Brockman has worked with numerous clients including FAGE, Vertex, Cambridge Trust, Five Star, and S2 Security. While Brockman clearly has the ability to juggle multiple projects and responsibilities, he is also known around the office as a force of positivity in various situations.

“Jim always says ‘Everything is fine,’” says Farrell. “It’s literally his signature — he’s really able to handle the stressful environment, calm everyone down, and make everyone laugh.”

To celebrate his tenure and hard work, Brockman received the keys to a brand-new Mini Cooper in June. He is the third employee to receive a Mini Cooper in recognition of their time with Boston Digital. In 2017, we surprised our Accounting Manager Susan Galvin with new car keys during a holiday gift swap, and former CTO Scott Noonan received a car as well in 2011 for his 10-year anniversary. It’s a unique vehicle for sure, and this decision was intentional on Murphy’s part.

“We chose a Mini because we wanted it to be a fun car—a thank you for putting up with me for 10 years,” says Murphy. “If we let them choose, they may have picked a more practical car, but we wanted it to be fun. Think of it like eating dessert for dinner.”

In an industry that typically sees high turnover rates, it is important to focus on ways to retain top employees and convince the best talent to stick with your company. Elements like a strong work culture and room for advancement are non-negotiable, but recognition for employees’ dedication is equally as important to serve as motivation for all team members.

While appreciation can come in all shapes and sizes, some milestones happen to deserve a bigger surprise. And judging by the excitement and smiles in the room, this was a celebration for all of Boston Digital. 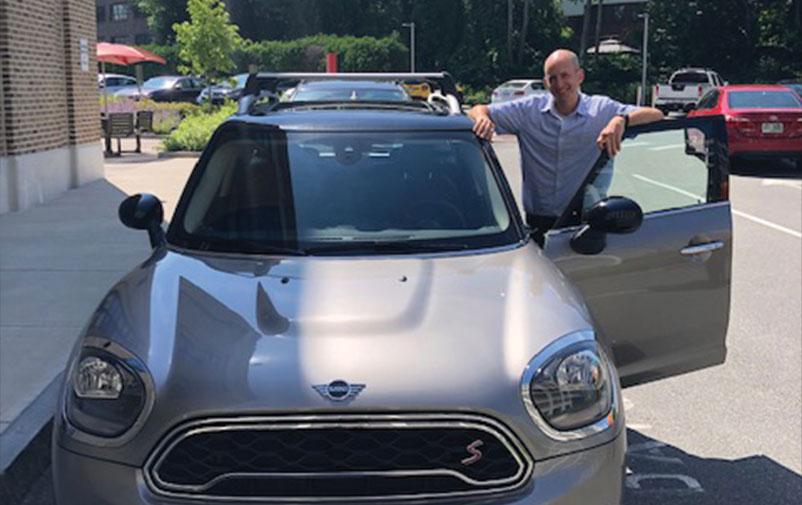